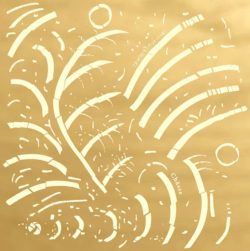 “Members during the exciting early years represented by these 15 LPs of :zoviet*france: were Ben Ponton, Robin Storey, Peter Jensen, Paolo Di Paolo and Lisa Hale. :zoviet*france: is an idiosyncratic group of anonymous music makers, gatherers of sound, and fabricators of unknown music. For nearly 40 years, they have explored and reported back from the liminal areas of music and composition, walking the margins where little is easily located and consensus reality melds with the hypnagogic and half-heard.

Having wilfully obscured themselves in Newcastle upon Tyne since their inception in 1980, :zoviet*france: has developed a radical relationship with cheap technologies, homemade acoustic instruments, primitive looping and sampling techniques, and basic dub trickery from which the group has crafted a distinctly unique vocabulary of sonic hypnosis.

Just as the group’s sound has alchemically reconfigured inexpensive technologies, the packaging of their releases has avoided standard formats with aluminium, steel, wood and porcelain among the materials that have been bent and cut to shape instead.”