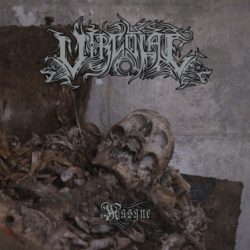 After five years of roaming city streets like a pack of rabid dogs, Vircolac is set to release its debut full length album Masque on Sepulchral Voice Records in Europe and Dark Descent Records in the US. Following on from 2016’s The Cursed Travails Of The Demeter EP, Masque celebrates a bolder edge mixing more visceral and vicious aural assaults with with a foreboding and obtrusive atmosphere throughout the thirty-six minutes of the recording. The album title reflects the myriad masks human beings hide behind and the cover represents what is ultimately left once the mask of flesh is finally removed. Whether pauper or opulently venal, the end is the same for all. Thematically, the album reflects two different strands of story telling, with the first half adopting a starkly defiant tone throughout. The second half then takes a moodier assessment of the obsequious venality that governs the world inhabited and inherited, the conclusion of this being the mass industrialized slaughter of much of Europe’s young in the great war. It is a direct statement of purpose by Vircolac and the culmination of half a decade of steadfast belief in the continual relevance and importance of death metal.  “Masque is a raw and aggressive death metal album that maintains a foreboding atmosphere throughout. This is best demonstrated on songs like ‘Snake Among Man,’ where the dizzying, dissonant riffs melt into each other in a sea of discordance and growls.”