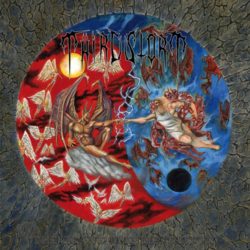 “In the past, not many knew of the Swedish black / death metal band Third Storm, still they managed to keep this beast going from 1986 – 1988. Other than founding member Heval Bozarslan, the lineup was completely different back then. Four 14-15 year-old crazy metalheads who worshiped extreme metal of that time and wanted to make their own noise in their home town Uppsala. Perhaps they were not very talented musicians back then, not strange since they were only kids, but they did a dozen shows and a couple of rehearsal demos before splitting up way too soon. Years passed, each member went their own way and the band dwelled in obscurity till 2014 when two original members, Heval and guitarist Jimmy Eriksson awakened this beast once again. Two new members joined, David Eriksson (guitar) and Daniel Ekeroth (bass), and session drummer Johan Ericson helped the band to record their EP Taritiya Me which saw the light of day in the fall of 2015 on Dark Descent Records. This line-up showed a new face of Third Storm. While the spirit of the ’80s was there, now they were better musicians with better song-writing. The band proved with Taritiya Me that they can be reckoned with and indeed that 26 minutes EP blew many doubtful minds away. Soon after the EP, Jimmy had to leave for various reasons so Hasse Hansson joined as the second axeman. The band also found their full-time drummer Alvaro Svanerö. Both Hasse’s song writing skills and lead wizardry combined with Alvaro’s breathtaking drumming raised the band to a new level of excellency as clearly shown on their debut full-length album The Grand Manifestation which is definitely one of the finest albums of this year. According to Bozarslan, this is the Third Storm was supposed to sound like 30 years ago. “It’s hard to put Third Storm in one category, and that’s a good thing. Black / death / doom / thrash, all blended together, the variety throughout the album is well-crafted and there’s everything for everyone who love extreme metal here; brutality, heaviness, speed, melodies, chaos, doomy stuff, blast beats etc, and everything is excellently done in its pure blackest form, and with a very raw but crispy wall of sound at the same time, and all the songs stand out and are actually very catchy. The Grand Manifestation is also a concept album and part one of a trilogy. You have to read the complex but interesting story itself (included in the booklet along with the lyrics) in order to grasp it fully. An existential and philosophical journey with lots of metaphors and symbols that can only come out of Heval’s imaginative mind. The ending is a cliffhanger, so hopefully the guys hurry up with the next album.”