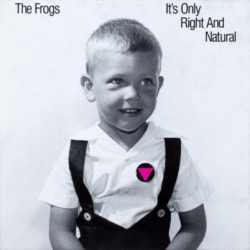 A 30th Anniversary vinyl reissue of THE FROGS cult classic, It’s Only Right and Natural, originally released in 1989 on Homestead Records. One of the more remarkable acts to emerge from the indie rock scene of the 1980s and ’90s, the Frogs were a group with something to attract and offend nearly everyone—they were canny songwriters who could write and perform melodically satisfying tunes in a variety of styles, but they enjoyed marrying them to lyrics that were usually absurd and frequently offensive, drawing eccentric humor from issues of race, sex, contemporary culture, and the music business. While the larger mainstream audience never embraced them, for a band so eager to polarize they managed to be exposed to far more listeners than one might have expected, largely because their fan following included a handful of important alt-rock tastemakers, including Kurt Cobain, Eddie Vedder, and Billy Corgan. The vinyl reissue features remixed and remastered audio (the original album was accidentally pressed in mono when released in 1989) and comes housed in a gatefold sleeve with newly added artwork (same classic cover!) plus track-by-track liner notes and intro by band member JIMMY FLEMION.