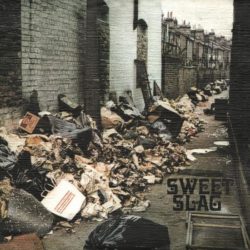 Formed in 1969, this UK outfit went on to record only one ultra-collectable album in 1971 for President Records. Originally the album was going to be titled “Guerilla Jazz Rock” but came instead to be renamed “Tracking With Close-Ups,” which is a good thing, as this is certainly not a jazz rock album! The band toured extensively, supporting the likes of Deep Purple, Stray, Nucleus, Graham Bond, Black Cat Bones and Third Ear Band. Over the years, the Sweet Slag album has built a cult reputation with collectors. The album is certainly different from many released at that time—it has a unique heavy dark psychedelic aspect running through the album; it almost borders on proto-metal on several tracks, as well as having some darker progressive elements and Beefheart and Zappa moments, making it a thoroughly unique and classic album. Original copies of “Tracking with Close-Ups” are very scarce nowadays… which is fine, as for the first time here is the first official reissue of this superb album, taken from the original master analogue tapes.