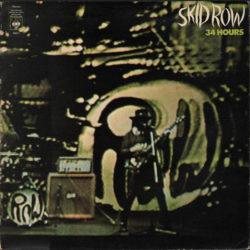 This is NOT the hair metal band of the same name! This Skid Row was formed in Ireland in 1967 by bassist and songwriter
Brush Shiels. The band also (briefly) featured Phil Lynott on vocals, the 17 year old Gary Moore on guitar and Noel Bridgeman on drums. This double LP features the band’s second album (recorded in ’71 without Lynott) plus a full Lp of previously unissued material from the late ’60s-early ’70s. Skid Row was short-lived, as Moore went on to join Thin Lizzy as second lead guitarist. Nevertheless, these recordings of smoking power-blues with jazzy flourishes and serious chops, are a high-water mark for early ’70s British blues. This release comes in a pasted gatefold hardboard sleeve.