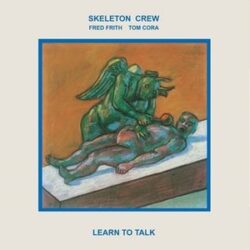 ReR Vinyl present a reissue of Skeleton Crew’s Learn to Talk, originally released in 1984. A true avant-rock classic. Skeleton Crew were the maverick duo of Ex-Henry Cow guitarist Fred Frith and the great late cellist Tom Cora. Formed during one of Frith’s early American residencies, Skeleton Crew was a legendary two-man crew who somehow — in real time, managed to play all their instruments, cello, bass, electric guitar, violin, vocals — as well as, drum parts dislocated between the two of them. No one sounded like Skeleton Crew, ever. An unprecedented and tight duo coalition that produced some of the best music of the decade. Originally released in 1984, Learn to Talk consists of a highly integrated mixture of art-rock, punk energy, tape manipulation, and re-imagined folk elements. A catalog of invention that remains breathtaking today. Fully re-mastered and including a printed inner sleeve with previously unpublished text by Fred Frith in memory of Tom Cora on the 20th anniversary of his premature passing.