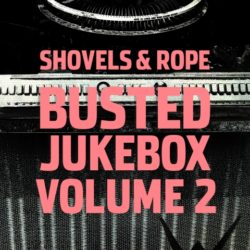 Busted Jukebox Vol. 2 is the follow-up to, you’d never guess it, 2015’s Busted Jukebox Vol. 1, which featured covers of the likes of Guns n’ Roses and Elvis Costello sung by ShoRo with help from acts like Lucius and JD McPherson. This time around, some of the featured ShoRo collabs include a few from artists on the bill for next year’s ShoRo-curated High Water Festival, including Concrete Blonde’s “Joey,” co-presented by Nicole Atkins, and Brandi Carlile with “Cleanup Hitter,” a song written by Charleston’s own Bill Carson. And a local makes another appearance with “The Air That I Breathe,” a track from the Hollies reimagined by Indianola, Owen Beverly’s most recent project.

Some 2017 High Water nods are in Busted Jukebox Vol. 2, too, like John Moreland (on Willie Nelson’s “Blue Eyes Crying in the Rain”) and Matthew Logan Vasquez, who sings “Untitled 1,” a Sigur Rós track.