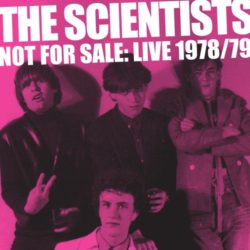 The Scientists’ pre-Swampland days in Perth are brilliantly encapsulated on this collection of mostly unreleased live material from ’78 and ‘79. These were the days when former Victims and future Hoodoo Gurus drummer James Baker led the band alongside guitarist/singer Kim Salmon, and when their poster read “Rock ‘n’ Roll in the tradition of The Groovies and The Heartbreakers”. The Perth-based line-up recorded the brilliant “Frantic Romantic” single and self-titled EP highlighted by “Last Night.” They also recorded a posthumously released LP—the “pink album”—which came as a massive disappointment due to bad production and a reduced line-up. Not For Sale: Live’ 78/79 is a collection of live and rehearsal tracks that captures the band making the same noises as on those 45s, and presents live versions of the fan faves and vastly superior versions of most of the LP tracks as well as coughing up a bunch of hitherto unreleased originals and covers to boot. This is “The Legendary Scientists”—asscienti they were dubbing themselves within months of forming—as they should be heard. The main set comes from late 1979: a live-to-air broadcast from Melbourne’s 3RRR. The same line-up is also present on a handful of primitive live recordings, made by a friend at one of the group’s regular haunts, the Governor Broome Hotel in ‘79. Play this really loud and it sounds like right there in the pub, shitty PA and all. Packaged with rare and unseen images, an original 1979 Roadrunner magazine feature by Kim Williams (of the Summer Suns, and co-writer of Swampland) and additional notes by Grown Up Wrong’s Dave Laing. This collection provides a thrilling glimpse into what an album by the “Legendary” Scientists might’ve sounded like if it had been recorded in 1979. With the current incarnation of the band touring the US again and performing the likes of “Last Night” and “Frantic Romantic”, this is an essential listen for all Scientists fans, no matter which line-up they prefer.