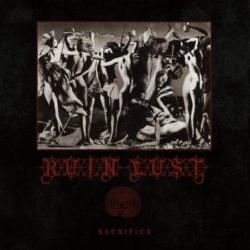 Sentient Ruin is proud to release RUIN LUST’s incinerating sophomore LP Sacrifice for the first time ever on vinyl, after a self-released tape surfaced in early 2019 bringing back under the spotlight one of America’s most elusive and feral extreme metal entities. Featuring current and past members of ANICON, TRENCHGRINDER, VORDE, VILKACIS, FELL VOICES, VANUM, and YELLOW EYES, the NYC black/death/war metal horde return six years after their debut album was released on Psychic Violence Records, with their darkest and most baneful compositions to date, blending the most pestilent strains of black and death metal with the blunt force trauma of grindcore to elevate the notion of sonic warfare at unseen new extremes. While remaining true to the genre’s voluntarily involved and feral approach to aural barbarism, a careful ear will not fail to notice the modern and transformative approach taken by the band to assemble their sonic war zone, utilizing a dense and suffocating sense of atmosphere and an immanent sense of dynamics and unpredictability to mercilessly blindside and destroy the listener. By all means a pinnacle in this year’s war metal output, Sacrifice is a modern and defiant spasm of extreme metal terror that will find loyal proselytes amongst fans of Diocletian, Knelt Rote, Heresiarch and other contemporary black/death bands who show to be more inclined to breaking new ground and paving the genre’s future than living in the past.