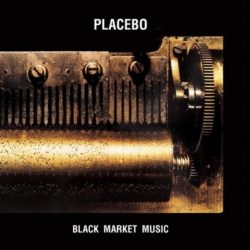 Originally released in October 2000 and now available on standard weight black vinyl. Black Market Music is the third studio album by Placebo from 2000. Black Market Music may not contain anything as immediately catchy as Without You I’m Nothing’s Pure Morning, but the dark hooks of Taste in Men, Special K, and Slave to the Wage, with its Pavement sample, sink in deep after just a few listens. Spite and Malice, featuring a guest turn from One Inch Punch rapper Justin Warfield, is a surprisingly successful marriage of Britpop and hip-hop, while the moody drone of Passive Aggressive showcases the band’s more reflective side.