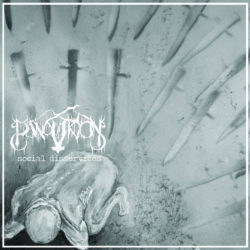 Social Disservices is quite possibly Austin Lunn’s most scathing and pained album to date. Sonically, in performance/execution and of course in the very content lyrically, every nuance of this album screams with the agonizing reality of mental health issues and the often broken inner workings of the institution born to try and quell the folks afflicted with such disorders. The very discussion of such institutions is a lot to take and Austin has so skillfully reflected these horrors through the 4 tracks of this punishing and gut wrenching album. With blazing speed, the ruptured and twisted vocal style of Austin leading the charge, Social Disservices gives the listener a bleak yet masterful glimpse into a subject that most are fortunate enough to never have to, or just plain don’t want to discuss/face.

Bindrune Recordings and Nordvis Produktions are pleased to bring this album together once again, this time as its own special release (was initially released as part of the Revisions of the Past 2 LP set) with the same re-recorded/mixed and remastered audio found in that set, but with expanded artwork and a crystal clear splatter vinyl.