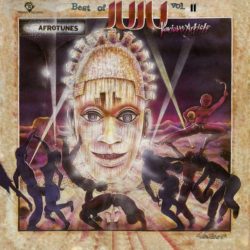 Basically ‘Tabansi’ is music written by and for Nigerians, or specifically the Yoruba diaspora which nowadays makes up a fifth of the Nigerian population. Juju is distinguished from Highlife, which was written mostly for Western audiences and sung in pidgin English. While slight, the differences are crucial, and essentially Juju of the sort played by Ojo Balingo and his amazing band is the real deal Yoruban music, more often played on local instruments, sung in local tongues, and absolutely full of mesmerising West African percussive voodoo, with some era-appropriate ‘70s funk breaks and psyche Hawaiian guitars to boot.

“Popularised all over the globe by King Sunny Ade in the 1980s, juju music had actually been around for decades before. Resembling highlife music in many ways, juju could be described as a more traditionally African form, mainly played by Yoruba people for Yoruba audiences.Although the original sleeve artwork implies that this is a ‘various artists’ album, it’s pretty clear that it’s the same unnamed juju band throughout, performing two long tracks, one on each side. Side 1 calls forth more traditional juju sounds, whilst the darker Side 2 adds funk breaks galore. Psych-rock Hawaiian guitars, talking drums and political lyrics rub shoulders in this almost-unknown 70s juju rarity. Ojo Balingo, in Yoruba, means ‘rain comes’, or ‘a breeze comes’. And so it does, with this never-before reissued obscure collectors’ vinyl from the vaults of Tabansi Records.”