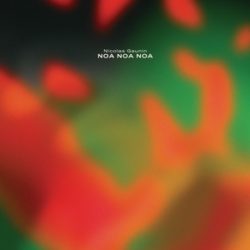 Nicolas Gaunin’s surreal sound experiments lift you out of the everyday and transport you to an off-world Tiki lounge set high amongst the tree tops of a tropical rainforest, where you’re surrounded by bizarre, colorful creatures, and weird psychotropic plants. Noa Noa Noa is modern Dada, a neon soundtrack to your most outlandish fever dreams. Nicolas Gaunin is the alter ego of Nicola Sanguin, part of the vibrant experimental music scene around Padua, Italy where he plays in outsider rock groups The Lay Llamas and Orange Car Crash. Nicolas Gaunin is his solo electronic project, a bright and playful cosmic mash-up that uses the rhythms of traditional African percussion groups and skews them slightly to create unsettling, off-kilter grooves. These drum machine experiments are laid over a teeming microscopic sound world of bird calls, insect chatter and weird jingles reminiscent of advertising earworms or video game soundtracks. Noa Noa Noa takes its influences from music from around the world, and inspiration from high and low culture; from composer Gyorgy Ligeti to the cosmic sounds of Italian DJ Danielle Baldelli, from the experimental music of Moondog or Harry Partch to the playful sounds of Francis Bebey or the exotica of Martin Denny, from Iannis Xenakis to 8-bit video game music. Noa Noa Noa ends up sounding something like the imaginary soundtrack to the Nintendo Gameboy version of a lost William S. Burroughs novel. Incredibly, most of the tracks on Noa Noa Noa were recorded live in one take with the express intention of creating music that is, in contrast to much of today’s electronic music, bright, sunny, light-hearted and mischievous. The resulting album is both totally essential and also completely throwaway. These tracks were originally released in 2018 by Artetetra Records (Italy) as Noa Noa (cassette and digital) and Danse de l’Oiseau (digital only). Hive Mind Records present Noa Noa Noa on vinyl for the first time.