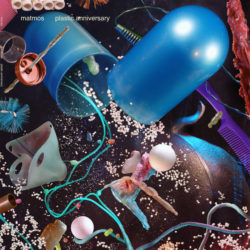 Thrill Jockey Records is pleased to announce Plastic Anniversary, the new album by Baltimore-based electronic duo Matmos. Pushing off from the restricted palette of their last album, the critically acclaimed Ultimate Care II, which was composed entirely from the sound of a washing machine, Plastic Anniversary is also derived from a single sound source: plastic.

At once hyper-familiar in its omnipresence and deeply inhuman in its measured-in-centuries longevity and endurance, plastic supplies, surrounds and scares. Seemingly negligible, plastic is always ready to hand but also always somewhat suspect, casting toxic shadows onto the everyday. True to form, the band have assembled a promiscuous array of examples of this sturdy-yet-ersatz family of materials: Bakelite dominos, Styrofoam coolers, polyethylene waste containers, PVC panpipes, pinpricks of bubble wrap, silicone gel breast implants and synthetic human fat.

If side one is playful and poppy, side two is sharper and darker in its implications, and features more live drumming than any other Matmos album. Things kick off with “Thermoplastic Riot Shield” a single-object study built entirely out of the sound of a police riot shield being stroked, rubbed and struck. The resulting sounds are processed into a tense assemblage of harsh noise, deep dub basslines and jarring cuts of silence. On a squeaky loop straight out of a Jacques Tati film, “The Singing Tube” draws out the pinging resonance of a ten foot long PVC pipe played entirely with plastic toilet brushes, and hits a flanged overtone effect not unlike the string compositions of Arnold Dreyblatt. Bristling with whistles and noisemakers and plastic-gloved handclaps, “Collapse of the Fourth Kingdom” bolts a percussive showcase for the high school marching band playing the signature patterns of drumline and Baltimore club onto jarring edits of LEGO bricks clicking into place and weird smears of processed plastic horns. Since plastic was described by its first developers as a “fourth kingdom” beyond animal, vegetable, and mineral, this track heralds the eventual collapse of the political economy that birthed the oceans of garbage that now choke our world. Thinking the dystopian consequences of plastic through to their post-human conclusion, the final track, “Plastisphere” sounds like a field recording of insects and birds and pattering rain and ocean waves, but is in fact a work of digital sleight of hand: every single sound on this track has been artificially constructed out of samples of bubble wrap, Velcro, plastic bags and straws and, tellingly, an emergency stretcher. After a volatile and vibrant suite of poppy plastic electronics, Plastic Anniversary ends in an acknowledgement of the planetary price yet to be paid.