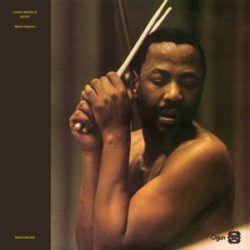 Otoroku present the first vinyl reissue of Louis Moholo Octet’s Spirits Rejoice!, originally released in 1978 on Ogun Recordings. One of the most legendary free jazz records ever produced, Spirits Rejoice! is a high achievement in the movement of the era as it soars beyond oppression with a raucous and spiritually uplifting surge of movement and melody. Featuring Harry Miller, Johnny Dyani, Keith Tippett, Evan Parker, Nick Evans, Radu Malfatti, and Kenny Wheeler, this is former Blue Note artist Louis Moholo’s first album under his own name and is a classic example of the cross-pollination between South African and British players. Mongezi Feza’s ‘You Ain’t Gonna Know Me ‘Cos You Think You Know Me” alone is enough to make your life a better place. Made with permission and in association with Ogun Recordings. Features an exact reproduction of the original artwork and liner notes, along with new liner notes from Matthew Wright. Remastered by Giuseppe IIelasi. High gloss sleeve; edition of 1000.

From Matthew Wright’s new liner notes: “The South African melodies, now so familiar, were wholeheartedly taken on board by the individual musicians, their unity of purpose mirroring the belief in the strength of the collective. Stunning solos, often close to the edge, feature throughout — Evan Parker and Keith Tippett on ‘Shine Wherever You Are’; the contrasting trombone styles of Nick Evans and Radu Malfatti on ‘You Ain’t Gonna Know Me…’; the octet sounding like a full big band; and behind them, the relentlessly rhythmic urgency of the piano, bass and drums. Add to this Kenny Wheeler’s moving and all-encompassing trumpet on the elegiac ‘Amaxesha Osizi’ and the joyous flamboyancy of ‘Wedding Hymn’ with Parker’s relatively straight-ahead tenor and Tippett’s dextrous piano solo over a bed of riffing horns, (fast) walking bass lines and a supreme sense of swing. Louis’ early hero, Big Sid Catlett, would have loved it!”