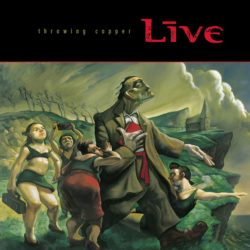 The new, super deluxe edition of Live’s sophomore album, Throwing Copper, is now out via Radioactive/MCA/UMe. The new edition of the album marks the 25th anniversary of the record’s initial release

The new box set edition not only features the album with bonus tracks on 2LP black vinyl, and a 12-page booklet with an in-depth interview with the band chronicling the era of the album, but it also contains 2CDs with a 26-track line-up that includes Live’s previously unreleased, explosive eight-song performance at Woodstock ’94 on a separate disc. The 25th anniversary Throwing Copper collection will also be made available in a deluxe digital version, as well as a standalone CD.

First released on 26 April 1994, Throwing Copper cemented Live’s position as one of the most instrumentally powerful and lyrically impactful bands of the modern alternative-rock era. Throwing Copper, which topped the Billboard 200 Albums chart a year after its initial release, also features a pair of No. 1 Modern Rock singles (‘Lightning Crashes,’ ‘Selling The Drama’) and has since been certified eight times multi-platinum by the RIAA, having sold over 8 million copies.