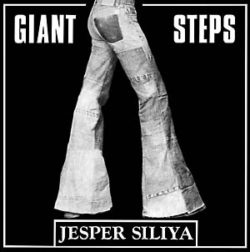 Shadoks Music present a reissue of Jesper Siliya’s Giant Steps, originally released in 1978. This album by Jesper Siliya was released originally on the same label as Chrissy Zebby Tembo’s My Ancestors. Jesper Siliya used to play with the Ngozi Family and most likely, they played with him here. This is his sole album as a band leader, and it’s a great one — very catchy, simple but beautiful compositions, you’ll find yourself singing these songs in your sleep. Heavy fuzz-guitar is all over the album — Fuzz guitars all over with African beats and political lyrics. Originals are impossible to find in any condition and the prices are high when you do find them. African rhythms and ’70s rockish underground moods — never too polished. A “sugar & spice” album. The music suits all fans into Zam-rock such as Ngozi Family, Witch, and Amanaz. Heavy sleeve; 180 gram vinyl