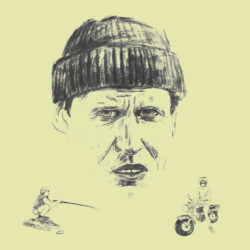 Supremely hungover, red-eyed-and-can’t-quite-be-arsed but utterly LIFE-AFFIRMING bedroom/loner-pop masterpiece from the Itchy Bugger. May this record bless your miserable existence like it has ours.

Songs that somehow combine punk concision and psychedelic whimsy with a fluency accessible only to THE GREATS. The songs are lusher and more intricately arranged than on the first LP (maiden voyage on our shoppe label), even as they double down on the DIY, drug-scrambled weirdness, and that unmistakeably PRIVATE, nocturnal, kitchen-creeping, don’t-wake-the-flatmates vibe… oh yeah and still with that same sadsack fucking drum-machine beat on every song.

The custom bonehead riffage he contributes to Heavy Metal and Diat is here repurposed into something more textured and introspective and jangling and DAZED, mekkin me think of The Moles (especially ’Sometimes’), Pip Proud, subtly OUT early 90s Flying Nun gems like David Kilgour’s Here Comes The Cars or John Kelcher’s Personal Disorganiser… if you’re feeling saucy you can throw in bits of Razorcuts, Afflicted Man, Solid Space, Beauty Contest,Television Personalities +++ while yer at it (‘An Adorable Graveyard’ not only makes me BAWL, it is also the best song Privilege-era Dan Treacy never wrote.). It’s just… so good. Not sure I’ve felt this ALIVE since I lost my virginity and a few mins later narrowly escaped death trying to ride a bicycle the wrong way down a dual carriageway (“But that was only two weeks ago!” ARF).

Ach, REALLY floundering here trying to describe the best album of the decade – which somehow WE dumb cunts are releasing. Not gonna waste our breath any more…THOSE WHO KNOW DON’T SAY AND THOSE WHO SAY THEY JUST DON’T KNOW