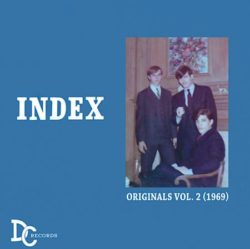 In February of 2009, Jim Valice of Index discovered three reels in a cardboard box stuffed in a closet of his parents home in Michigan. These songs from 1969 were on those reels. Fourteen original compositions by Index, seven making their vinyl debut, the other seven released for the first time ever, all transferred from the original tapes!   Index was once again a pure power trio by 1969. There was massive demand for Index personal performances. Index was not interested. It was becoming more difficult for guitarist John Ford to travel back from Yale University to Detroit on a weekly basis. Index wanted to push the bounds of their own creativity. They chose to use their limited time together to write and record.   Index were the epitome of a DIY band. They made great use of the newly developed sound on sound (SOS) technology. It allowed Index to record basic tracks (guitars, drums and lead vocals); with SOS they then could add keyboards, additional guitar tracks and vocals. A musical revolution in miniature!