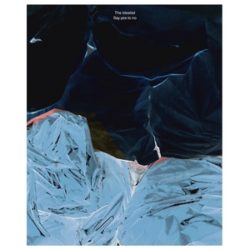 Idealist “Say Yes To No” (Ideal)

Joachim Nordwall digests and mutates dub in unique industrial style on The iDEAList’s almighty follow-up to a tape and 7″ in this killer mode, bringing guest vocalists, JA’s Nazamba and polymath John Duncan, for a deeply crooked ride worthy of rinse and repeat. Picking up where his raw Early Tactical Experiments In Techno & Dub left off in spring 2019, the rugged styles of Say Yes to No poses only slightly less risk of contracting salmonella with a more stewed and treated suite taking in proper songs starring Nazamba and John Duncan amid all manner of virulent, wayward electro-dub variation. As with his superb tape for Industrial Coast, that wicked 7″ with Genesis P-Orridge, and even his recent albums as Joachim Nordwall — Conventional Wisdom with John Duncan (IDEAL 182LP), and the collaborative CD Communication Is Key — the iDEALIST naturally highlights fundamental links between dub and noise, the core principles of manipulating sound in space, with a critical blend of tactile playfulness and rigorous pressure. The two vocal cuts are outstanding in their own rights; “Bigga Boss” features Kingston-based poet and playwright Nazamba utterly possessing the opening shot with his baritone growl, rooting the LP at one pole, while John Duncan’s equally compelling appearance on a similar riddim in “Tough Doubt” comes to epitomize the project’s direct approach toward alloying and allying styles with alchemical suss comparable to The Bug, Ossia, or Andreas Tilliander. Vocals also spill out into the LP’s other tracks, but here they’re more textural and elusive, scudding thru “Everyone Fucking Relax” in a way recalling DJ Scud’s thudding remix of Bong-Ra, or masticated into intelligibility on the amorphous dub-noise lurch of “Inner Space Dub (Insane Version)” and the LP’s cataclysmic closer “Say Yes To Dub”, which are all held tight in contrast with the more defined techno and electro-dub structures of the LP’s club-ready highlights, “The Ecstasy” and “Shit Skull/Golden Mind”. It’s a hugely enjoyable album — one that leaves bits in your teef and gets up in your head like a healthy dab of shatter. RIYL: Ossia, DJ Scud, Andreas Tilliander, Jay Glass Dubs. Mastered for vinyl and at Dubplates & Mastering, Berlin.