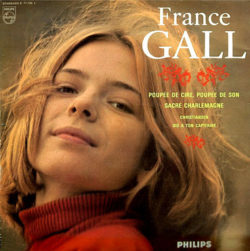 Vinyl reissue of Poupee de Cire, Poupee de Son – the fourth album by France Gall where she is accompanied by Alain Goraguer and His Orchestra. It was originally released in April 1965. The album documents her rise as a teenage pop icon. The hit density isn’t quite as high as on her follow-up Baby Pop, where almost every song is a certain winner. Poupée de Cire, Poupée de Son, Sacré Charlemagne and especially Laisse Tomber les Filles are instant winners and had been highly successful as singles and on EPs.