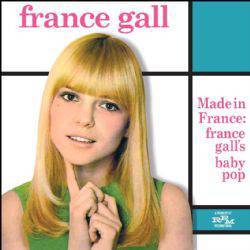 This album is the definitive collection of Gallic girl France Gall’s upbeat, irresistible girl pop, recorded for Phillips 1963-1968. She won the 1965 Eurovision Song Contest with Poupée De Cire Poupée De Son, written specially for her by the legendary cultural icon Serge Gainsbourg. She was the first pop singer he’d written for. Made in France: France Gall’s Baby Pop includes all the songs Gainsbourg composed for France Gall, bringing them together for the first time outside France. It’s also the first time Poupée De Cire Poupée De Son has been released in the English-speaking world since the 60s. As well as satirising Swinging London on Made in France Gall brought her naive magic to subversive Gainsbourg songs like Teenie Weenie Boppie” (about LSD) and Les Sucettes (a barely cloaked metaphor for a sex act – she had no idea what the song was about). Also unique are the first chance to hear her shelved take of Gainsbourg’s Bloody Jack outside France, and the first-ever reissue of her Japanese-language version of Poupée De Cire Poupée De Son.