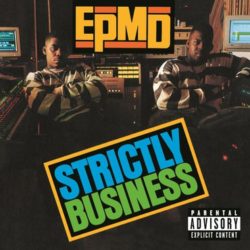 As even the title states, ‘strictly business’ is a no-nonsense mission statement from epmd (‘eric and parrish makin’ dollars’), a straightforward, seamlessly produced piece of rap history. as the title track makes clear, ‘strictly business’ was all about setting the standard for rap’s burgeoning pop dominance. eric’s laid back vocals contrast his partner’s more staccato delivery. together the team contributed much to pop culture by way of this album – ‘the steve martin’ is a self-explanatory dance lesson, while the tight groove of ‘you gots to chill’ enjoyed a respectable tenure in the public consciousness. ‘let the funk flow’ is marked by a loose, expertly mixed blend of samples, while ‘you’re a customer’ employs ‘fly like an eagle’ along with a spare backing track and an encyclopediaful of cultural references. the album’s comedic closer is ‘jane,’ a heavy-handed tale of a lady who messed with the wrong mc.