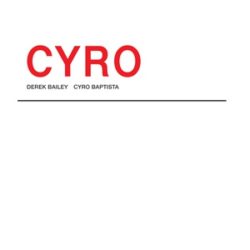 Honest Jon’s Records present a reissue of Derek Bailey and Cyro Baptista’s Cyro, originally released on Incus in 1988. When Cyro Baptista moved to New York in 1980 from his home city of São Paulo, he brought with him an arsenal of percussion instruments, including the cuica (friction drum), surdo (the booming bass drum associated with samba), berimbau (single-string bow with resonating gourd), and cabasas galore, in the next few years deploying them most notably in numerous ensembles curated by John Zorn, who helped set up this studio session in 1982. As you might expect from someone whose infectious grooves have graced the work of Herbie Hancock, Astrud Gilberto, and Cassandra Wilson, Baptista expertly fires off cunning polyrhythms, even traces of thumping samba, with restless fluency. Bailey, the wily old fox, skirts and eschews the bait, which is quickly conjured away and newly fashioned. The guitarist homes in on the delicious squeaks of the cuica and the twanging drones of the berimbau with truly awesome tonal precision. You could sing along if you wanted, after a caipirinha or two. And he gets almost as many different sounds from his instrument as Baptista can from his kit — check out the stratospheric plings and string-length fret-sweeps of “Tonto”, which sound more like a prepared piano than an acoustic guitar. Wonders abound, from the berimbau/bent-string exchanges that open “Quanto Tempo” to the delightful collision of howling cuica and spiky bebop on “Polvo”, and the spare, preposterous Webernian samba of “Improvisation 3”. These days, “improvisation” often appears without its customary qualifier “free”. If there were ever a case to be made for its reinstatement, this album is the best supporting evidence. Freedom means you’re free to get into the groove, free not to, free to play with each other, free to play against each other. Sometimes frustrating, even scary, but more often than not in the hands of these two great masters it’s hilarious, exhilarating and utterly irresistible.