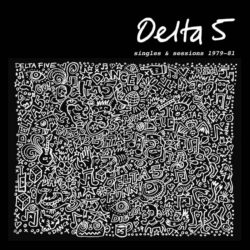 There was a Leeds music scene at the time that revolved around the Leeds University Art Department, and local bands The Gang of Four and The Mekons were doing well. Kelvin had briefly replaced Hugo in The Gang of Four and was recommended to Delta 5 as a drummer. Kelvin and I played in a band in York together so I went along to audition and joined in May 1979.

First release “Mind Your Own Business” / “Now That You’ve Gone” – 1979. The Gang of Four were recording their album, Entertainment, in the WorkHouse in the Old Kent Road and they decided that they could help us out at the same time. We stayed with them on a houseboat on the Thames at Cheney Walk, Chelsea and their manager Rob Warr arranged for us to go in and record whilst they were out at a Madness/Specials gig in Camden.

“You” was supposed to be the first recording but it wasn’t happening so we changed tack and recorded both songs in about 8 to 10 hours. We had only been together a few months and done about 3 or 4 gigs by this time. Rob took the tapes to EMI who were paying for the studio but they passed – no surprise there – so Rob went to Geoff Travis at Rough Trade. Geoff came to see us at The Global Village (later Heaven) and we met him afterwards and agreed to a deal on a handshake. The single came out in December.

“Delta 5” and “Make Up” included on this from that session of February 1980. We recorded a follow-up, “Anticipation” / “You” in February 1980. We were gigging more often at this point and “You” turned out pretty well. More gigging in Europe and the UK; around 1980 – 81, we played quite a bit at The Lyceum in London and shared the bill with The Gang of Four a few times, Echo and the Bunnymen, B52s, Specials, Teardrop Explodes and U2 to name a few. We toured with The Gang of Four and Pere Ubu in 1980. In September 1980 we did our second Peel session, which included “Triangle,” which is included on this CD. Later in September 1980 we went to the USA.

We experimented quite a bit on the album and perhaps we should have just recorded the songs as they were – the session versions included here are more a reflection of how we were live as they were all recorded quickly in one or two takes. None of us really liked the title of the album but it was a compromise – I think we argued quite a lot back then. We did a UK tour culminating in a headline gig at The Venue London. We even had a horn section including Rico on trombone.

The album came out somtime late in 1981 and we went to Holland in October – I decided it was time to leave when we got back – I think Julz and then Kelvin left and Bethan & Ros made one more single with new personnel before calling it a day in 1982.