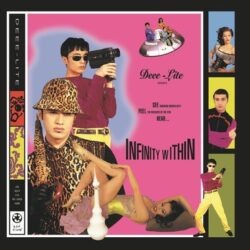 Categories: Deee-Lite, Disco, Get On Down, House

Deee-Lite “Infinity Within” (Get On Down)

Never Before Reissued On Vinyl! After the smash success of Deee-lite’s debut record World Clique, and their now-iconic dance club hit Groove Is In The Heart, anticipation was high for a follow-up from the New York-based dance music trio of vocalist Miss Lady Kier, and producers DJ Towa Tei and Super DJ Dmitri. For their sophomore record Infinity Within, Deee-Lite opted to venture in a different direction of sorts. The club-embracing disco-funk sounds and groovy vibes of World Clique were ever present,but while that record contained themes of global togetherness, Infinity Within took a more socially aware route, with politically charged themes of environmentalism, (To show their bonafidese, Infinity Within was one of the first titles to be issued in an ecologically friendly Eco-pak.) sexual liberation, voting rights, and critique of the juidicial system. Taking major inspiration from the ancient Chinese divination text I Ching, Miss Lady Kier would later explain that Infinity Within was a natural progression for the group, not a departure.