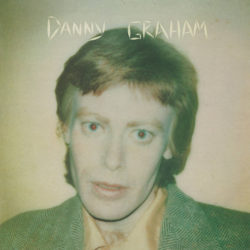 Xerox Music is delighted to announce the first reissue of the self-titled debut album by Danny Graham. Originally released in 1980, it is a high watermark in the field of Australian home recorded, self-released singer-songwriter albums. An odd mix of folk, glam and soft rock with tons of personality. This home-recorded outsider classic has been compared to Bowie and Syd Barrett. The album is occasionally described as psychedelic, most likely because it doesn’t really fit squarely into any other classification. On paper it could be described as simply a blend of folk and soft rock, but that doesn’t quite hit the mark. Danny’s unique songwriting, whispered vocals and multi-tracked guitars combined with the low-budget production elevate it to something greater than the sum of its parts. “Ordinarily the kind of record that would make us run a mile, Danny Graham’s personality shines through on every song, and the LP’s low-budget, home-recorded loner charm has turned it into an enduring favourite.”