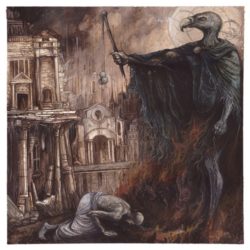 London’s premium metal force Craven Idol unleash their second album of ruthless first wave blackened thrash in the vein of early Bathory, Gospel Of The Horns, Manilla Road, and Inquisiton. After four years of toil, the U.K. four-piece present: The Shackles Of Mammon, an uncompromising and unique blend of tag-less extreme metal from the early days of horrible hellnoise. Inspirations are many; be it heavy metal gods such as Mercyful Fate, Candlemass, Sortilege or Manilla Road; early pioneers like Poison (Ger), Samael, Razor, Bathory, Venom; pretenders to the throne like Gospel Of The Horns, D666, Inquisiton…but don’t be fooled—this is no tribute act. Recorded at Birmingham’s Priority Studios and engineered by Esoteric’s Greg Chandler (and mastered by Dan Lowndes at Resonance Sound), The Shackles Of Mammon boasts an old school production as well as Craven Idol’s most fierce and varied songs to date. The album boasts artwork by the extraordinarily twisted Daniel Corcuera. The artist’s powerful take on Sascha Schneider’s 1896 wood carving Mammon und sein Sklave is a striking work of art. Lyrically the album deals with the vices of man, the plagues they unleashed upon themselves, and the rationalization of its own actions—be it in tragedy or ruin—through the creation of deities and cults. Mammon, the Demon of Avarice, reigns above all, whilst the black arts and countless religions seek to justify human failure. ON BLACK / ORANGE MERGED COLORED VINYL WITH GATEFOLD AND POSTER.