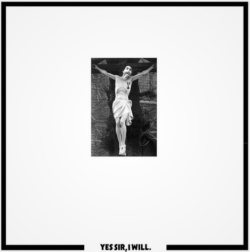 Yes Sir, I Will was the fifth and penultimate album released in March 1983 by the anarcho-punk band, Crass. The album was essentially a bitter and virulent attack on then prime minister, Margaret Thatcher, and her government in the aftermath of the Falklands War and was set nearly wholly over a raging and an almost free-form improvised backing provided by the group’s musicians. Many of the lyrics from this album are extracted from Penny Rimbaud’s extended poem ‘Rocky Eyed’. The original vinyl release contained no banding between songs, thus presenting the contents as one long piece split over both sides, making it the longest punk song ever recorded (the CD release was tracked by individual song). Rimbaud summarised the album in an interview to Radio Free France: “The boundaries increasingly ceased to have any relevance – prior to the Falklands War, one naively believed that there were separations between ‘this’ and ‘that’ and that if you dealt with ‘this’ then you could do ‘that’… like songs – each song had its own little separate thing to deal with and Yes Sir, I Will is a statement about the fact that there isn’t any separation – that it’s all one and the same thing, that there is no single cause or single idea – there’s no-one else to blame but yourself. That you can’t say, “Well let’s now concentrate on the Northern Ireland problem”, “let’s now concentrate on the problem of sexual relationships”… you can’t do that – everything now is one major problem and that problem stems from yourself.” Both the CD and Vinyl editions feature a fold-out poster sleeve that is identical to the original pressings.