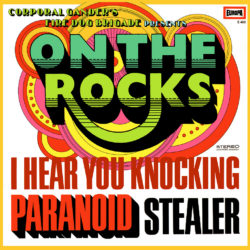 Reissued on vinyl, including the band story, this is a killer German exploitation hard-psych album from 1970, originally released by the Europa label, which – besides tons of mainstream cash-in albums – also put out acclaimed late ’60s-early ’70s LP’s by a.o. Hell Preachers Inc., The Petards, John Deen & The Trakk and Electric Food. In this case we’re dealing with the band that soon after would become popular as krautrockers Wind. If you fancy the idea of Wind’s first LP ‘Seasons’ done in a more direct and hard hitting style, then you should get this reissue of ‘On The Rocks’ straight away!