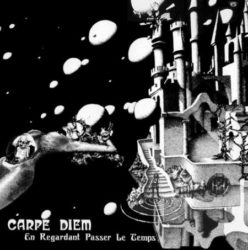 Formed in 1970, CARPE DIEM started out playing covers by the likes of East of Eden, King Crimson, Deep Purple, and Uriah Heep in clubs along the French Riviera. Original compositions made their way into the band’s repertoire over the five years between their formation and the release of their debut album, En Regardent Passer Le Temps, in 1976. Little wonder then that the band sounds as magnificently tight, polished and mature on this classic debut, truly one of the gems of the French rock scene. The success of the album brought them dates with other major French bands like Magma and Ange, led to the recording of a second album, and then ultimately to the sort of nearly total obscurity which deserves to be undone with a reissue such as this one! “The album practically encompasses the diversity and inspiration of the French progressive rock underground. It is, easily, one of the finest albums to have emerged from that scene. At the risk of sounding like a raving fanboy, En Regardent Passer Le Temps is indeed a classic record for the ages.”—Greg Northrup, Progweed