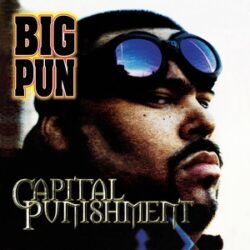 Categories: Big Pun, Get On Down, Hip-Hop

Big Pun “Capital Punishment” (Get On Down)

2020 repress. “Big Pun remains on the best rappers ever list to this day. Reasons for this weigh largely on his debut Capital Punishment. His commanding voice and rapid fire delivery make it clear there will never be another Big Pun. Pun was New York. His confidence on the mic made him stand out among his contemporaries. Similarly, the production — by a cast of many — remains ever so New York loyal. The close cousins ‘I’m Not a Player’ and ‘Still Not a Player,’ may have been the hits off this album but it is packed with so many more that show Pun’s true abilities. ‘Beware’ and ‘Dream Shatterer’ are great examples of Big Pun at his best, dark cinematic production with just enough room to let him breathe fire. On ‘Twinz (Deep Cover)’ Big Pun is trading bars with his mentor Fat Joe over a remake of Dr. Dre’s classic beat. Here Pun delivers one of his most quoted verses that contains among others ‘Dead in the middle of Little Italy little did we know that we riddled some middlemen who didn’t do diddly.’ There are numerous guest appearances, the best of which include afore mentioned Fat Joe (on several tracks), the Roots’ Black Thought on the MC showcase ‘Super Lyrical,’ Prodigy and Inspectah Deck on ‘Tres Leches (Triboro Trilogy),’ and an extra-insane Busta Rhymes on ‘Parental Discretion.'”