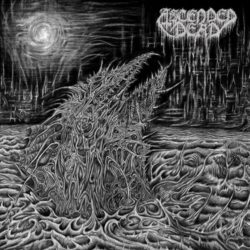 “Surprisingly born under San Diego’s sun, Ascended Dead are nevertheless as ugly as it can be. Not by design nor by trying their best to sound that way but just because that foul stench they ooze from every pore is their true nature. Yes, their founding members and some of their current members have played or are still playing in other bands but none of this really matters as their main man JR stresses out that ‘everything we’ve attained was built from the ground up and we’d like to maintain as much of a stand-alone legacy as we can.’ Yes, they’ve had their fair share of struggles and obstacles to overcome—something well-documented in the booklet of last year’s self-released Ritus Mortuus compilation—but this somehow only strengthened their determination and musical idiosyncrasy. “See, a lot of bands these days wish so bad they were part of the same early extreme metal wave that swept the plate clean in the llpasceabhoate ’80s but end up only second guessing how all their idols thought. But Ascended Dead are a rare case of a band who just go for it and whose DNA is naturally carrying that FTW element, that simple idea, not wait, instinct to destroy everything in sight. Necrovore, Insanity or even Sarcofago are just of some of the acts they’ve been compared to but it doesn’t really matter because after one raw-as-fuck demo, one EP and two compilations, Abhorrent Manifestation is the sound of a band who have come to term with their own bestiality and instead of trying to tame it, they’ve decided to ride the wave and let it overflow everything. “Recorded last spring at Trench Studios in Corona, California, most of the album ten songs are exclusive to this release, with only three being newer, more focused versions of tracks already presented on side A of The Advent tape and Ensnared For Eternity from the Arcane Malevolence EP which has been given a new lease of life.”