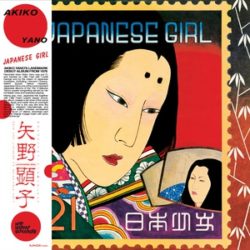 Tip-on sleeve; includes download card and original four-page insert with lyrics and line-up. Wewantsounds continues their Akiko Yano reissue program with the release of Japanese Girl, her landmark debut album from 1976. Backed by Little Feat with Lowell George and by top Japanese musicians (including Haruomi Hosono), Japanese Girl is one of the most important Japanese albums of the ’70s, mixing pop, rock, and Japanese folk together with Little Feat’s superb classic sound. After a marriage with musician/producer Makoto Yano and the birth of her son (Fuuta), Yano and her team resumed the recording of the album and decided to pitch Little Feat for a collaboration as she loved the group. Against all odds they said yes and Yano left Tokyo for Los Angeles in March 1976 to record a full side with them. The legend has it they found it so difficult to keep up with Yano’s compositions they returned some of their fee. The session was nevertheless stunning and Lowell George even compared Yano to Stevie Wonder. The Little Feat blend of New Orleans groove matched Yano’s melodies perfectly, as witnessed on “Funamachi-Uta Part “. Originally a traditional song from The Nebuta Festival in her hometown of Aomori, the Little Feat version is a formidable slow-funk workout not dissimilar to their classic, “Spanish Moon”, serving Yano’s beautiful vocals and sense of groove to perfection. The whole side is a match made in heaven, showcasing the classic Little Feat line up at their funkiest with Yano’s unique Japanese twist. The Japanese side on the album gives a great snapshot of the Tokyo music scene of the ’70s with many musicians gravitating around Haruomi Hosono and also several musicians from Japanese band, The Moonriders. Recorded at the legendary Onkyo Haus studio in Tokyo, the sessions mix singer-songwriter sensitivity and pop with traditional Japanese sounds and instruments like the shinobue transverse flute, the koto string instrument, or the Tsuzumi hand drum as played on “Hekoriputaa” by the legendary percussionist Kisaku Katada who was appointed Living National Treasure by the Japanese state in 1999; together they create a beautiful east-meets-west mix masterfully driven by Yano’s creativity and unique talent. First international release. Remastered sound.