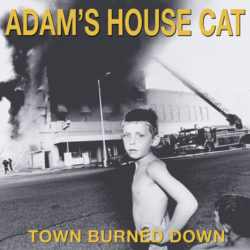 On September 21st, ATO is proud to release the “lost” album by Adam’s House Cat titled Town Burned Down. Formed in 1985 by Patterson Hood and Mike Cooley, Adam’s House Cat appeared primed for success in the Our Band Could Be Your Life / pre-Nirvana-era of indie-rock. The tracks have a fierce Replacements-like edge to them, but Hood’s vocals and melodies are unmistakable, and this collection is a stunning preview of the songwriter he would eventually become. This lone album was recorded in 1990, but things fizzled out for the band shortly after as members moved away or got real jobs.
The master tapes were unearthed a few years ago and Hood decided to give them a full re-mix, he cleaned up the vocals and sent them to Sterling Sound for mastering. The resulting album sounds fantastic, and the package comes with short-story length liner notes from Patterson detailing the rise and fall of the band.